A
Standard
A
Middle
A
Largest 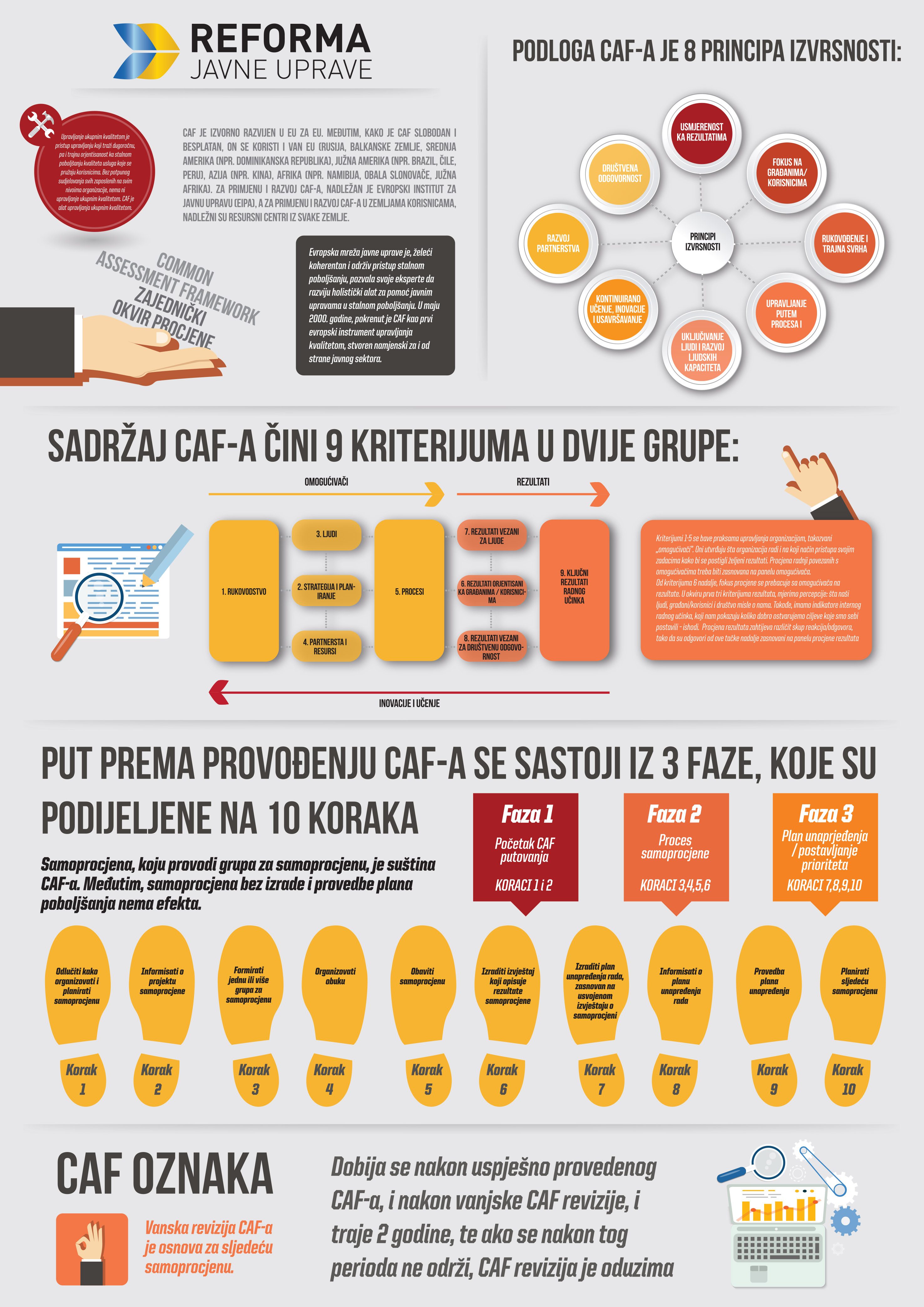 European instrument for quality management in the public sector

The Common Assessment Framework (hereinafter referred to as: the CAF) is a result of cooperation of the ministries responsible for public administration from the EU countries. The pilot version was presented in May 2000, and revised versions were published in 2002, 2006 and 2013. The CAF Resource Centre was established in the European Institute for Public Administration (EIPA) in Maastricht, and it closely cooperates with the network of CAF national correspondents.

The CAF is free and the tool that is simple for use, which assists the public sector organisations in the whole Europe to introduce the quality management system, with the objective of improvement of the overall effect of the organisation. This tool falls in the category of tools of Total Quality Management (TQM), and it is inspired by the general principles of excellence of the TQM, as well as by the Excellence Model of the European Foundation for Quality Management (EFQM). It is especially designed for the organisations of public sector, taking into account their characteristics and responsibilities they have in relation to provision of services.

The purpose of the CAF is to be a catalyst for the process of complete improvement within the organisation, and it has five basic objectives:

1. introduction of the culture of excellence and the principles of total quality management (TQM) in the public administrations;

2. their progressive direction to a full cycle “plan-do-check-act”;

3. facilitating self-assessment in public organisations in order to have a diagnosis and definition of the activities of improvement;

4. to act as a bridge between various models that are used in quality management, both in public and in private sector;

5. facilitating bench learning between the organisations of public sector.

Organisations that are starting to implement the CAF have an ambition to develop in the direction of the focus to results they achieve and they want to introduce the culture of excellence in the organisation. Effective use of the CAF should in time lead to a further development of this type of culture and thinking within the organisation.

Since 2000, almost 2000 organisations from the public sector in the whole Europe use the model and the number of users of the CAF still grows.

BiH and the CAF

In Bosnia and Herzegovina, a smaller number of organisations from the public sector started introduction of this model in the previous years. By the Revised Action Plan 1 (2011 – 2014), the Public Administration Reform Coordinator’s Office was put in charge of the set of measures for introduction of one of the models for total quality management and its promotion, and with expert support of the “German Society for International Assistance – GIZ” it prepared a “Comparative analysis of the models for quality management in public administration”. This document proposed two models of quality management in BiH: the CAF and the system based on the standard ISO 9001:2008, after which the Council of Ministers of BiH supported further introduction of these models at the level of the institutions of BiH. The following part provides the translated and adjusted Guidelines for the CAF 2013, in the official languages in Bosnia and Herzegovina. In 2015, the Public Administration Reform Coordinator’s Office completed the process of self-assessment by the CAF model, and trainings were implemented for a certain number of employees in order to ensure a support for implementation of this model in other organisations of public sector in BiH that decide to apply it. In the first half of the year, implementation of the CAF started in the Civil Service Agency of BiH and in the Statistics Agency of BiH.

All information on the CAF model, as a tool for quality management can be obtained in the Public Administration Reform Coordinator’s Office.